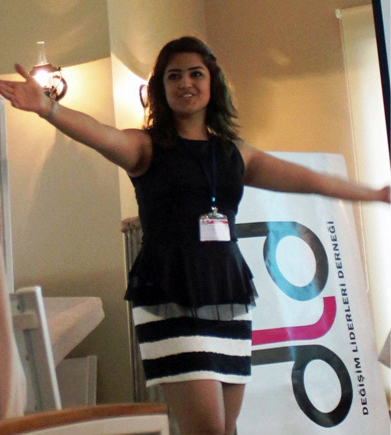 Esra, an ambitious participant in the Sparks program, is pursuing an unorthodox career for many Turkish women: Electrical Engineering.

Esra grew up in Ankara, the older of two daughters in a family of modest means. That meant limited access to the supplementary academic support that more affluent families can provide. Through self-discipline, hard work and determination to follow her dream, however, Esra gained admittance to university.

In addition to overcoming many challenges in her life, Esra has also been able to overcome the stereotype associated with her choice of major. Having announced her decision to her relatives, she was repeatedly told that engineering is a “man’s job,” and that she would be unsuccessful. Not surprisingly, she began to doubt herself.

“When I began my university, I felt that, not only would I not be successful as a woman engineer, but also as a human being,” Esra says.

It was because of the negative responses toward her life choices that Esra became closed-off and less outgoing in communication with others.

“I was overly sensitive, and easily offended. I read a lot about personal growth. However, I was unable to take the book knowledge and make it my reality—until I met DLD and the Sparks program.”

Sparks offered Esra a way to train herself in the field and to turn the things she learned into her reality.

“Now, I enjoy having people around me, and I can communicate well with them…I can easily express myself and I am not offended anymore.”

Although her family was unable to afford private lessons and extracurricular courses in the skills she longed for, Esra could join the non-fee Sparks Program. It offered her all of these things and more.

“I was able to take many lectures and courses, I made lots of new friends, and I learned a lot of things that I may never have learned otherwise.”

In addition to courses and knowledge gained, Esra was also able to travel throughout Turkey and meet other Sparks university women. The conferences and traveling allowed her to see her friends and learn at the same time.

“Sparks was the greatest time of my school year!” Esra says of her experiences.

TWI’s “Sparks” is an innovative and experiential leadership and career development program for Turkish women who are the first in their families to attend university.

TWI is a US based organization that provides innovative, practical and sustainable leadership programs for girls and women through its flagship Sparks Program. Sparks is managed in Turkey by its partner organization Degisim Liderleri Dernegi (Change Leaders Association) a registered Turkish nonprofit. All donations to TWI directly support the Sparks Program and are fully tax deductible through its fiscal agent Turkish Philanthropy Fund (TPF).